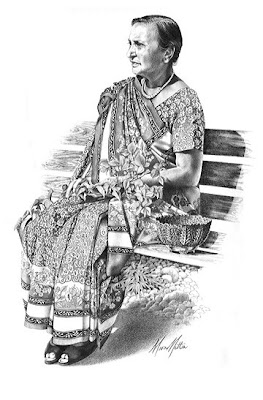 In simple cotton sari like a package of obscure she passes my street. The briskness of steps expel a hurried demeanor of hers. In tight pleated hair her face reflects toughness blended with blandness.
“oh –that she works in accounts section. The plump short lady—ah , she had joined the job on compensate ground after her husband’s demise.”
Every passed monsoon added few more strands of whites to her tight pleated hair.
--Season after season--- in the monsoon with an open umbrella, always in her familiar briskness she walks past my street.
---At the exit of vegetable market I found her full of loads--. “Oh she has grown up girls who else would do the job.” replied my associate.
Exiting out at the temple gate with same evaporated femininity and bland tough face she hurried past the street.— “you know I saw her again. I think I get her in every nook and corner.”--“ah she has three married daughters. What a tough lady is she?” –“ah- tougher than one should be” came reply with another corner. “My God what kind of lady is she? Have you seen her behaving desperately to get her work done? Yesterday in the bank standing in the queue first she tried to pass her paper to someone standing at the front. When that did not materialize she started shouting for the delay. A rough and completely haughty, ungraceful self she is! I can’t bear this kind of person.”
The toughness of her face, the shaky briskness of her pace, the shameless display of her desperation at the delay of work done all seemed valid. Standing in the queue for hours with her tired legs and routinely fighting for the trivial were the outcome of those long, lonely hours, when there was no one to help and console her. With the burden and bondage of four girls in row a hapless blanket was wrapped around her life it was she who was beating the broken destiny. Neither anyone was around her to help, nor was willing to come around. She must had built that shameless fighting spirit to fulfill the long necessities of life.However it was built on shaken ground as the relaxation of desired firmness destiny had cruely denied her. To build a firm substratum needed a loving care of emotional support and long hours of working-a luxury for her during the devastating era.
Fighting those long hours of insecurities alone without any expertise and requisite courage she planed.Bereaved with all strategies tools of success she moved ahead and fought the life and accomplished the jobs to be done, might be with loss of grace and etiquette. Her desperation repulsed the people around her, whenever she broke the queue or she made an issue, violently showing her displeasure at the non accomplishment of the job in her own wild way. It was her way to show displeasure to the life.
“You know all her girls are married to class one employees. What a fighting spirit is she? She had displayed exemplary strength during her loss. Her girls were small then. The youngest one was only few months old. She has power to accomplish the job. A real heart wrecking life she has been, but she manages it.”
Now no explanation was needed about her as the obscure figure in cotton sari,the brisk steps and bland toughness of face were echoing enough of her.
Posted by Arpana at 7:49 PM