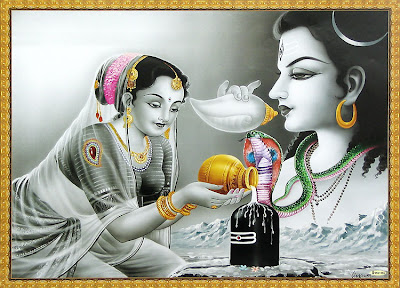 The month of Shravan usually falls in between July to August. The Monday of the month Shravan is especially dedicated as day of lord Shiva.
Mythologically, the story about the commencement of rain was linked with Samundra manthan. During the month of Shravan lord Shiva had swallowed the poison, which had come out of the Samundra manthan or churning. To moderate the effect of poison taken by Shiva the rain god Indra had instructed the rain to shower the lord.The gods had poured milk, curd and honey to cool and mitigate the effects of poison . Then onwards, during the month of Shravan which coincides with monsoon is viewed as the month of lord Shiva.
The worship of the lord Shiva with offering of belpatra (leaves of wood apple plant, which is a body cleanser and has the power to lessen the rising pitta constitution of body), milk, curd and honey (all with alkaline nature) are traditionally being offered specially in Jharkhand.
In Jharkhand, there is a place named “Baidhyanathdham”, famous for lord Shiva temple. People from neighboring states or locals throughout the month of Shravan visit the place with their faiths and offerings.
The offering of cool, alkaline natured milk, curd and honey symbolizes the need of body cleansers to our system during the monsoon. As the infections tend to surge in moist and warm season, the body needs to build the immune system.
During the month of Shravan religious people refrain themselves to onion, garlic and non vegetarian food for better cleansing of body systems.
Monday, specially during the month of Shravan is dedicated to lord Shiva. People observe fasting on Monday which is known as “Shravan Somwari”. Locals with the offering of flowers, belpatra chant mantra “Om Namah Shivay”.
The five syllables of the mantras- na, ma, shi, va, ya- are the beej akshras or seed letters of the five elements of the creation- Earth, Water, Fire, Air and Ether.
-Flesh represents Earth.
-Blood represents Water.
-Body heat which helps in digestion represents Fire.
-Prana or life giving force represents Air.
-Mind represents Ether.
Constant chanting and repetition of these holy syllables verbally and mentally generates powerful spiritual vibrations that help to focus the mind which in turn align the chakras. The calm mind is a ground work to blossom intellect.
Shiva means our own self, the purest one, our inner most core. So we must cleanse the soul with the potent tool that is the mantra “Om Namah Shivay”.
The seven vital chakras of the body also signifies the Shiva- Sakti aspect of the body. The upper three chakras represent the Shiva tattva -the mind, the dynamic one whereas the lower three chakras represent the Sakti tattva, the earthy and the material form of the body.
The dual aspect of energy and matter, prakriti and purusha, the drava and guna, the substance and qualities.
When the upper and lower chakras are aligned one attains equanimity, the state of “brahmn”- the balanced one. The balanced state of self opens the gate of opulence, unlimited love and bliss.
The ancient yogi “Shiva”, the universe-“Shiva”, the purest self of ours “Shiva” also signifies the gender equity and loving togetherness in conjugal life. The Ardhnariswar form of his, as half man and half woman avatar signifies his love and togetherness to his beloved wife Parvati. It also represents the creation and balance of nature with equality to both gender in ratio and status.
Posted by Arpana at 8:52 PM