The stuck up lives 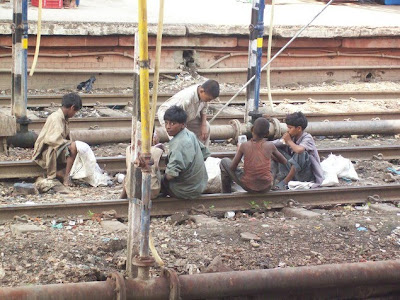 The roaring train thumped into the platform and a sudden motion surged over there. The emptying of trash bin and unloading of furnishing started.

Putting at the shoulder the nylon net of collected empty water bottles Vilash walked off with Malesh and Tulsi. He tied the lower edge of the shirt to put sachets of edibles which he had got from train.

The western fringe of the platform was joined with the slum. They stepped out of the station and crossed the drain. The over powering stench of uncollected garbage and excreta signaled him the border of slum. The nauseating smell would tell him – his breakfast time of Paw with fried snacks-before to pick up the day’s job. After scrutinizing the trash occupied place they mounted the fenced wall of railway’s colony for their breakfast. The congestion had been rising day by day as the station was getting bigger and busier.

Just outside the platform the smell and the slums were the shock of the city for the first timers. Especially the foreigners who gape abhorrently the contrasts of the city-the muck and the heritage site of the city. But still, the open soaring trash and littered garbage had been the fact- a part of the city though a contrast to- swanky- would be- world class platform, like their lives and the lives of well to do.

The day’s soaring mercury ensured the brisk business to him and in few hours he hurried the sale of more than half dozen of sealed fake water bottles. Only few had left in net, might be he would have to frequent the slum for another dozen!

The descending sun had mellowed the heat. Sitting on the bridge he had been watching the commuters of the elite train who were trading the way carefully evading the glance of choked drain and heaped trash.

Till evening he had filled the quota of his twice meal. At night he never cared for food. To soothe the strain of the day he had been depending upon the sniffs. Sleeping along the deserted dividers the starry night would herald nightmares to him. For last couple of years he had been on the seduction of adhesive sniffs for night sleep. The enforced drowsiness would blur the reality of dark hours and nightmares.

Near the dividers at night with other children he would huddle to sleep. The hard come sleep would vague the difference of glitz urbane crowd and Spartan life of choking drain and repelling smell.
During the visit of VIPs and big events in the city they would have to evade the platform. Then they would move to the parking bay for buses, right across the old station building.

Few years back during the raid the children had been picked up by the cops and were sent to a NGO for night shelter and learning. For two years he had been to a school and had learnt to read. He remembered the quotes of his school day about the Kashmir, “ if there is heaven on the earth it is here ,here, here.” he glanced upon the trash and drain and mused about renovating platform-the disparity of places.

Few railway officials walked ahead putting the handkerchief on nose. “ The smell is disgusting.” Another added-“It amazes me how such obnoxious air can prevail for such a long time even on this busiest Metros platform.” But before making the report make it clear-“What can be done to refurbish it?

He moved ahead near the bridge and stumble upon heaps of garbage. The uncollected muck had been a play ground and treasures of some good finds for them.

He moved from the fetid, unhygienic environment to sparkly railway station. The election was round the corner so it was declared as world class station. The work of renovation was going inside, the adjoining areas had been renovated. The new garbage bins were placed at regular intervals with dark plastic bags neatly tucked inside. These days not a single bin was overflowing with trash. The sweepers were swooping down on every piece of discarded paper, food packets, plastic cups and other trash. There was not any filth on the station. The bags were removed from the bins before they start spilling over. He trudged the foyers of the platform which was being sprinkled with water to settle the dirt.

Till dawn to dusk the day changed, the sparking world class place would transform into appalling sights after the walk of few yards -akin to his life. The day again passed and the next dawn ascended but every change and move would be same for him. To pass another day of non waiting..in the array of movements the stuck up lives of theirs…
Posted by Arpana at 3:55 PM