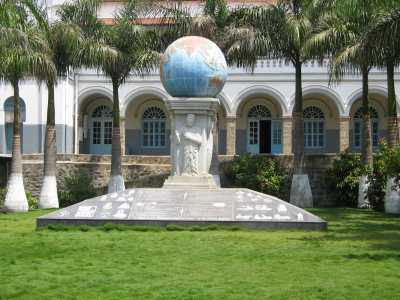 Dear readers, this post is a part of Close Up's Fire-Freeze contest. You can submit your own stories here or as a comment to this post. :)

The silence prevailed in the classroom as everyone was busy in solving the questions with rapt attention. Walking in between the rows for the while I stopped near the table to put my specs on it.

After a while reverberation of distant cymbal drifted across the classroom. Following the source I gazed the cathedral across the road of a prestigious campus- a convent school.

Just out of university and with fizzy confidence I had cleared my first interview successfully at an Institution.
Moving towards the vehicle with the appointment letter in hand I had suddenly spectacled a splendid cathedral inside the campus of a prestigious school across the road. Perplexed I analyzed my miss to notice the magnificent Institution at the unfamiliar place.

Magnetically I moved towards it. A gothic cathedral was there at the entrance of the Institution with beautiful flower beds in front of it. Beside it there was a fenced pond with flocks of geese floating into it.

Next moment I found myself in carpeted waiting room of the esteemed Institution with testimonials in my hand. Inside the campus walk of missionary people in robes were complimenting the anglicized air of the Institution.

In the Principal’s room positivity and congeniality were rolling. My testimonials received appreciative look with few cordial queries and my application got accepted over there.

The season of spring enchanted inside when I was asked to join the same at the start of the session. Off course after clearing the written and interview that I was confident to clear at comparatively smaller place. And then flung the last query regarding my experience and naively I flashed my appointment letter from another school to him. That was the end of spring over there. A solemn expression reigned the principle’s face- “We don’t appoint teachers of neighboring school.” My one misplaced step had crushed the brilliant opportunity there in a moment.

Battling the mental debate for two years I worked at the previous school situated across the road. From the assembly till dismissal the silent comparisons would rule my mental frame-“the present work place” verses “that-esteemed- my would be Institution.”

Suitably qualified I was being paid nicely over there. In amiable work mores I had been given charge of computer and science lab. I was the class teacher of senior section. Still I had been working or rather preparing over there for the life of “ my would be Institution - the bigger-esteemed one-across the road.”
Every morning alighting out of the vehicle and walking through the cheery echoes and wishes of students I would steal the glances of “my school and flocks of my students’ appreciatively.

Day by day the determination to be at the best had been scaling- I was working on every details- on course materials, the subjects, the soft skills and computer. Although I had visited and worked at the campus of “my esteemed Institution” at several occasions- attending the science seminars and teachers’ workshop as an invitee teacher from other Institution.

And then at a point I felt enough and decided for a discrete talk over there to “my esteemed Institution.”
In next session according to ethic and rules I applied and got call for demo class over there. That was my chance to make an entry and for that I had been waited for long two years.

In the demo class I had to prove my gripping prowess- I had to grasp attention of the class- first to last desk. I had to invoke “whys?” at every possible step and provide apt solutions at best of ease. I had to make the explanation gripping without dropping the spirit of the class even for the moment.

Inside the class room the flashes of curious eyes, resonances of my explanations and shuffling of pages were only vibrations. In pin drop silence the class was jotting down the details explained by me. When the bell rang then I realized presence of the Principal at the back of the class.

During the recess I was asked by the students about my joining date. By the Vice Principal I was assigned work as regular staffs though my date of joining was due next month.

After the recess I was told to invigilate the mock tests of senior section. At the hall I got the sight of him- a person more than a decade older than me. My greeting startled him - he congratulated me and made a fast escape from the place. In the elation the first brush of seize I felt over there.

In the staff room he was the weakest among teachers and frown of every gaze. His departure over there was being viewed as the delights of the students and relief of the Institution.

Next day during the assembly, adoringly watching the flower beds my gaze followed a pair of worn out shoes. Ascending above the shoes I greeted him- again the same sadness engulfed me sapping my contentment. This time he came near me- composing himself he was explaining something about the unruly children, the obnoxious colleagues and many more things.

My eyes were unintentionally gripping the details- of his unspoken words - his forty plus age, a vivid picture of jobless house hold, the engulfing poverty that was raising ugly head from every possible corner of his persona, out of his worn out shoes and cuffs, his shaken self confidence, illogical explanation and incoherent choked voice, more intensely his painful, hopeless look.

Everything sent a shiver through me-“how long will I survive this heaviness?” I felt I had never wished for these sights. I wanted to move immediately as the entire cheer inside me had evaporated. There was complete loss of liveliness- the sweetness of long wait and my success all seemed so heavy to carry. To escape that heaviness I wanted to run away from there…
Posted by Arpana at 9:18 PM