Rath Yatra - the journey of soul 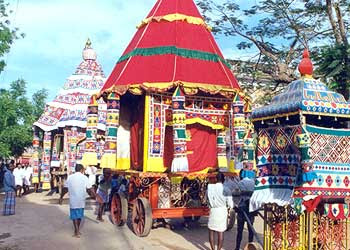 The ten days festivity of Rath Yatra in which the presiding deities of main temple Sri Mandira-Lord Jagannath, Lord Balabhadra and Goddess Subhdra are taken out from the temple precinct for annual pilgrimage in an elaborate ritual procession. The festival commences at around 4 a.m. with Mangal Aarthi and the Yatra starts to Gundicha temple two km away in Puri from main temple Sri Mandir.
The grandest festival of Rath Yatra is celebrated at the full moon phase of June –July (in the month of Asadha ). The yatra literally means a journey. The ten days festival of Rath Yatra which starts at the second day of Sukla Paksha signifies the journey of the soul-during the waxing phase of the moon -a right time to start austerity. The waxing of the moon helps to build up mental strength and restore calmness. Austerity under taken in the period increases sankalpa which is beneficial.
Lord Jagannath is identified as Vishnu and Krishna. In the original manifestation of Nilamadhaba, Lord is worshipped as sacred Nyagrodha Briksha or banyan tree –the huge tree gives its shade to everyone who comes underneath it. In the same way anyone who comes under the refuge of lord Jagannath is emancipated and gets relieve from sufferings.
The sanctity of the festival is such that even a touch of the chariot or even the ropes with which these are pulled is considered enough to confer the result of several pious deeds or penance for ages.
The believe signifies that only through the cleansing of soul and mind one can lead a peaceful existence. Therefore the ten days festival is actually a time to take the inner journey of soul , to work and contemplate on the measures to clean and strengthen it. Through the morality awareness comes and then on the firm platform of awareness the wisdom builds.
The whole concept of this annual pilgrimage of deities of Sri Mandir has been explained in Kathopanishada. “ The body is the chariot and the soul is the deity installed in the chariot. The wisdom acts as the charioteer to control the mind and thoughts.”