A melting pot of strategies 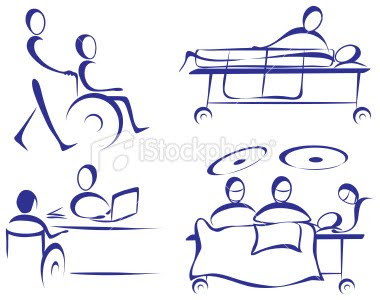 Simmering with its usual routines the place seemed a hot spot, an action oriented belly of Homo sapiens. Qualified as an outcome of stressed lives it was naturally viewed by most of us as a world of distress. Where one’s presence taken as a cruel joke of destiny and by the wisdom oriented soul as a mitigation of karmic accumulation. Oblivious of the down and dusk of the world outside ,it was revolving in the precision of emergency handling.

In this entrepreneurship era where dedication and honesty under the premier brand were promised to clients. Naturally the etiquette and politeness were used as strategic mantra to give edge to contender. But in that diverse community I found an inbuilt stratagem of action to rule out the worst. An earnest approach was there to work for the best with detachment. Everyone in that phenyl swabbed ambience seemed to approach the crisis strategically.

Under the effect of nauseating headache and dose of last night's medicine I was still reeling. The splitting headache my marathon raced brain accumulated last night while I was dealing with the ongoing crisis and procuring admission in the hospital. Eventually with the terrible aching I had hard time to keep the pace with the punctuality of the staffs over there. The paramedical who had rescued me last night from that tumultuous headache with an effective doze of medicine. He came in the morning with a ward boy to steer him to the ground floor for requisite tests. Out of concern he advised me to accompany them on the ground floor at my ease.

Half an hour later fighting unfamiliarity of numerous units of therapeutic world
I reached the destination.

In that centrally cooled corridor of pathological unit I sat on one of the recliners placed for patient’s kin. Braving the tides of hope and despair in that oriented space, I brooded over the ongoing crisis. Bereaved of options I decided to take on the suggestions prescribed by the specialists there.

My strained brain longed for fresh air as the chill of the closed place nauseated me further. But that was not possible I moved my attention to the people over there. The inbuilt urgency was palpable in all the proceedings over there.

However the hot spot had their own share of occasional gloom, yet I found it as a multitasking space of strategies. At one corner at a wheeled stretcher a semi comatose patient was striped in wire and with numerous tubes had been frantically making ruckus. Whereas some blessed with less troubles were silently waiting for their turns.

In the seat beside me an outdoor patient was there with his wife. With all requisite papers and files of med claim papers he was busily weighing down the pros and cons of the procedure.
The reception area and the waiting area at the ground floor were partitioned by the framed glass. Therefore the view of the entrance and reception was visible from the central corridor of the waiting area. Suddenly at the reception area a stirred movement of despair became visible and a fleet of surgeons and paramedical in their vibrated urgency made their way in to emergency unit.

To escape the heaviness of the sight I steered my attention to other corner. Through the canteen end, a blue uniformed canteen staff brisked holding a plate with a firm placed apple on it. Startled at the firm and non moving grip of apple at the plate, at first I blamed my splitting headache of last night. The mystery behind it got unfolded soon when he neared me. As it was packed hygienically by the cellophane paper and tapped at the plate, to ward off the floating germs of the air.

A feat of war foot strategy was visible everywhere- be it food and dealings involved with the patients.
Few elderly a must of those spaces were also occupying the space. A lady waiting for her pathological test slowly got up from her place to loosen the stiffness that was setting in her joints. She would walk to other end but a simple turn to move back after reaching the wall seemed a big effort to her. When she walked to me fearing her fall I bent my outstretched legs. She smiled at me and kept walking. A silent empathy created between us. With every walk she would halt at my place with a glow of smile on her sculpted elderly face.
“For knee transplantation I am here, waiting to go through some routine tests. My only daughter stays in States. She is married and a working lady. How will she get time for me? I too didn’t want to disturb her. Now I am already in the last stage of age where surgery works. After few years I will cross that age too. Earlier I refused as I would get frightened with the prospect of surgery. Now I decided to undertake it.” She pointed at her husband who was sitting on one of the recliner busy flipping some papers. She continued, “I am eight years younger than him. God knows who will be left alone after few years? I want to live on my own. This surgery will last for decade only, but at least that ten years I would be able to spend with dignity.”


I saw he was coming out of the unit in the hospital’s robes and banded wrist. He caught me talking congenially with someone and a bit relived with that last night terrible migraine attack. He sat in front of me against the wall throwing a smile. Soon he got busy on the calls instructing message to relieve the load of his work. When I switched my place and sat beside him, he simply threw another glancing smile of assurance and kept himself busy on calls. That time he was enquiring about his lost luggage at the Thai Air port.

I felt an action oriented strategy in the ambience and in every work over there and a strong resolve to fight the crisis to best of ability. What amazed me most that the poignancy of strategies was influencing the people present over there. That is why as a premier health provider it had been leading the race with dazzling height. I received an inbuilt strategic lesson and resolve to fight the problems over there.