A stroll on the river bank 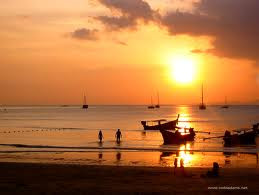 The day was silently yielding to the darkness. The mustard hue of the moisten sand beneath the sole was taking the soiled disposition in setting dusk. It was time to retreat to the home and to bid adieu to raged sunset. It seemed to reacting at the fun filled twilight at the river bank.

Holding the palm of my little one in one hand and my slippers in another I got a tingling sensation at my sole, as if sand was fleeting beneath. Taken aback I moved my feet to find a steering mollusk in the soil. Feeling relieved of the exertion it moved to the sandy sore towards the river.

An evening stroll on the sandy bank always seemed a good preposition for a relaxed weekend. However unlike sea-beaches it missed the permanent stalls of souvenirs or tender coconut, still the vibrant crowds of people on stroll were enough to attract hawkers. And there too up above on the embankment few of them were cashing their business of puffed rice and roasted channa.

The darkness was wafting through the riverside and was engulfing the crimson aura of the sun. I looked for my little one who was playing nearby with group of her friends. I got up to pick her. Catching my glance, she requested to stay there a little further. And I relented to her request feeling the soothe of breezy dusk.

At a distance a crackle of laughter broke behind me. It was a mix of arguments and hidden jibes. The spill of laughter spread in the air once again which followed the open taunts and laud bursting of giggles.

Every time the carefree airing of views followed the laud burst of giggles over there. The youngsters were making their presence through open voice and concern. Their well toned voice and bubbling confidence were telling enough about them. The carefree attitude always symbolized the youth of our society. Ironically the time and commitment, consciously fed that carefree attitude subsequently most of them got transformed into a withdrawn, introvert self .

Now the darkness seemed to spread fastly, painting everything in darker hue. Holding my little ones palm I started ascending the stairs of the embankment to reach the parking area. Trotting reluctantly with me but still engrossed in play and playmates, she was busy waving her friends.

Take care honey, I cautiously held her in front of me that shifted her attention to me. With chuckle she innocently put her query with her own readymade answer- “next weak again we will come here mama- with papa, won’t we? I nodded in affirmation. The mentioning of papa had drawn her attention to another favorite of hers that was balloons- “mama balloon”-she pointed to a big one. The crimson hue of evening was gleaming on her face.

The darkness was setting fastly as the desertion of the place was visible with receding sounds of moving engines. Putting her in my arms I contemplated quick exit from there. “Mama I want that” –she pointed to next enticed thing which was there on gorgeous display. My concealed engrossment she read and then she answered herself-“my stomach will pain mama when I would have that” Her childish inquisitiveness simply wanted to break the monotony of setting silence of me.

I thought about the three stages of life childhood, youthfulness and family life; in those receding hues of sunset all three appeared to me in different shades.
Posted by Arpana at 4:36 PM