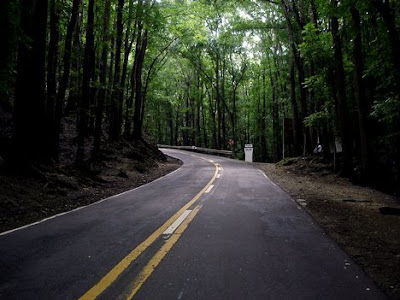 While typing the last few words on laptop I glanced on the clock. It was 6.00p.m.of evening. I had to get ready for dinner at an inaugural function. Anticipating a longer outing at night and to know how of the world outside I switched the TV for current forecast.

One after another the sequels of women atrocities that ranged from five yrs old child victim to forty plus woman flashed on the screen.

In yellow lights of MUV, the zooming engine had been piercing through the woods of plateau region. A narrow stretch of metalled road was reflecting in front of us. Through the abound chitterling of crickets the atmosphere was fragrant with flowers of Palash.

At the 7.30 the evening air of advanced spring was breezy. The darkness was serene except for occasional distant howling of jackals.The narrow windy road had been passing along the base of the hills. It was hemmed by the bamboo groves on the sides. And at some places the stretched was covered with the red of Plash blosooms.
While enjoying the secenic view outside I  regretted my decision to visit the place after the dusk."Before dusk the scenery around could have been better enjoyed," I thought. The drive through the forest to guest house was of about forty minutes.

After the drive of more than fifteen minutes through the woods Bidyut, the driver seemed clueless and turned the vehicle at different passes. Puzzled in local dialect he yielded I took the wrong turn. “Hmm…. ask someone,” suggested Adi.

In past twenty minute we had crossed occasional hamlets along the path. Most of the routes were deserted through the forest. In abundance the orange blooms of Palash were strewn on the road.

When the vehicle took a turn and rode a bump we saw a girl in red attire was standing at the turning. At the turn the vehicle moved swiftly and I caught the glimpse of her big eyes. At the distance others folks were also walking ahead in groups.

“They are going for Bihu festival’s fair ”- Bidyut informed. Then we were hearing the faint chorus of folksong with rhythmic dak beats which was straining  at the distance.

The ride for next ten minute again passed in silence. We were listening the howls of wilds and occasional rhythm of beats in the commute. The grooves of bamboo were still accompanying us on both the sides of the roads. And now the clueless commute was puzzling us.

Fortunately after sometime an old man was seen walking on the path with a girl behind him. Ask them Adi retorted- “ How did you forget the route,you came many times at this side.” “But that was during the day,” countered Bidyut.

Nearing them Bidyut rolled down the glass. The duo stopped - in local dialect the old man explained something pointing to a side lane. I felt girl’s gaze on me. The moment I moved my attention to her the vehicle moved ahead. Thus I managed only the glimpse of her big, longing eyes and red attire. Bidyut slowed down the vehicle and they walked ahead with us for the time being to show the right lane.

I exclaimed to Adi," Thank god, we found the way." When the vehicle moved ahead both of them were still standing at the corner of the road. With gratitude I viewed them from the rear screen. Her expressive eyes were still at me.

The MUV took the turn through the thick bamboo groove on its side and in five minutes we were at the venue.

In dining hall for women I took the place at the far corner near the window. Through the windy breeze the folk songs with vibrations of beats strained through the open windows.

At the central courtyard of quest house the presentation of local artiste was going on. To continue the sequel of the events the artiste were passing through the passage near our chairs. Again I felt a gaze on me through the passing group. The same girl in red attire, while moving ahead she smiled. Her smile and gaze puzzled me. The function continued till latenight.

Around mid night we were heading back to home, a forest official was accompanying us on the front seat. Other vehicles were coming out in fleets. After the drive of few minutes MUV rode to the single strip road.

“Few hours back a fair was going on here nearby- somewhere near a side lane. We had asked the path and had taken the route,” Bidyut broke the silence after the ride of five minutes.
Ranger stated solemnly –“Only a single strip goes up to five kilometers and after that the nearest hamlet starts.” Again silence reign inside the vehicle. My baffled gaze met Adi. He stared back in puzzling silence.

Next day I get her image and story,the girl in the red attire in the local daily.She was the daughter of an old man.A local had persuaded her in the relationship, promising to marry. But after a while he stopped responding to marriage proposal-the girl fed up with his sexual advance had been seeking help.The relationship earned her and his family dishonor in the society. Fed up with dishonoring the family and unable to check his sexual advancement she ended her life.

I was dumbfounded. Why was I getting her frequently? Why the red attire and her eyes were so evocative? Whether she was aware I had recently been helping and working with local women commission. Was she wanted to be heard and knowingly following me everywhere or was its just a coincidence? I was unable to find out.
Posted by Arpana at 5:15 PM