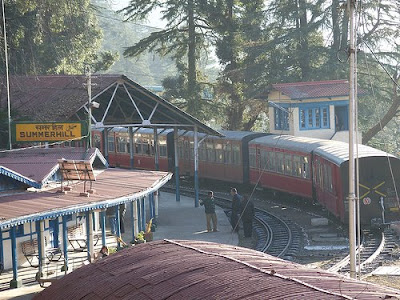 The heritage carriage moved whiffing the steam. The battling mind of Rhia had chosen immunity to abound splendor of nature as she had been wishing to set her trouble right.

With changing rhythm the whistling carriage had left the settlement far behind and now it was snaking through the foggy woods of pine and deodars. Tranquilized under the spell of verdant hill and misty chill everyone of the team was in meditative silence.

The twenty plus team for the research of temperate climate and vegetation was en route to Himachal. For many this excursion was serving the dual purpose -a research work of temperate zone and a pleasure trip.

Rhia glanced upon them, the guide and rest of the members after breakfast were either too engrossed in nature’s beauty or yielded to nip infused drowsiness.

She steered back her attention to the nature outside. Flanked by the hills on the both sides the train was puffing ahead in fog.

The indecisiveness had fogged her and created a stillness inside, she kept staring outside .The picturesque frame seemed to her like a dexterous work of an artist the details all alive- invigorating and breathing. She hoped her life like the oaks woods. Like their sturdy girth she too wanted to kiss the sky.

Trailing on the curvy track the head and tail of the snaking coaches were visible to her like the life. The visual retreat didn’t appeal her. “What will she choose and how?” she looked at her finger, and rotated the ring. It seemed heavy on her heart. She slided down the ring and clenched it into the palm. She did not want this. Certainly not at this juncture of her life. But she couldn't throw it either.

She remembered the sparkles on dad’s face that day, those were his proud moments. How contented dad was, even grey fringe of his face was complimenting the contentment of the job done well.

“How meticulously he does his work keeping details on everything? That vacation he had promised her a surprise gift. A meticulous search of his- keeping every like and dislike of hers in mind- a handsome profiled guy like her dad- with bright future ahead- he had chosen for her.

The decision seemed to her like the extreme of the coaches moving behind someone aimlessly. How she would drag herself in this kind of arrangement, a life without her choice, a decision complete strange to her.

A piercing chill of temperate climate shivered her as the carriage was now crossing the stone masonery arched bridge with deep ravine on one side. Next moment through the sweeping wind the carriage entered in tunnel setting everything in complete darkness. The parallel of her thoughts with engulfed darkness startled her and wild musing at the outcome perplexed her more. She pondered whether she is going to lose her identity in the darkness of life.

She hoped her life like the puffing locomotive ahead, with no one ahead,dictating terms on her- a life of her own choice where the breathe would be of her choice. She would be able to move ahead in the beautiful landscape of her life enjoying throughout.

At this juncture in both fields- study and art she was in complete harmony."How will she handle all these changes? And what is the need of all this? " The thought disturbed her more.

At that point matrimony was the remotest idea. She had kept her promise of higher studies to dad pursuing her breath of life- the art.

“No dad I won’t go ahead with this? Not now, let me live my own life?” She rehearsed the dialogue several times. Still indecisive and sure to falter in front of him, shaken she felt the mist of eyes were trickling down the cheek. To shelter them she took off her scarf liberating the curls. “O man I love you most but don’t impose---.” She again remembered dad’s face, “it is difficult to break his dream, but don’t crush mine”-she begged silently recalling dad.

“Let me walk in the open sky. Let me fly for few more hours. You are my world I will back to you. Let me live my own life.”

A sudden cheer and stir floated inside the coach as the teammates were out of their drowsy monotony and were discussing about the tea and snacks. The high nosed Asmit had been sharing the snack packet, uninterested Rhia passed it to next fellow.

At the platform the chilly gush quivered her, next she glanced upon smiling dad waiting for her. Attending a conference over there he had taken drive of three hours to see her there. Forgetting chaos of whirling mental debate she ran towards the magnetic warmth of dad. His rough hand supported her shoulder.

At the windy platform there was something more with dad- an air of strange feel. The presence of a captivating aura she sensed but she wanted to show her disapproval. She felt two intense longing eyes of long frame standing over there. She ignored them completely flashing the silence of “not interested” but I love my dad.

After two years-
She made the tea and put in front of empty recliner opposite of hers. Where is he? Waiting Rhia got impatient her eyes glued to the entrance. Ed made through the entrance smiling, “you know in next coupe two more honeymooners are there. One is from my institution I invited them over here,” he took the cup.”

Without adhering to his words Rhia mumbled-“you don’t go anywhere without telling me.” He took a sip smiling on her.
Posted by Arpana at 11:19 PM