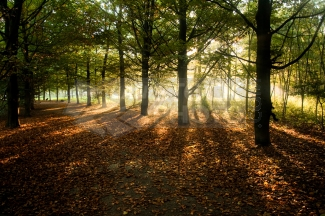 The peace and happiness are the ultimate aims of life. The Universe filled every heart with them still the created suffering rules the life. And like everything else the heaven too distributed it so unevenly in different lives. Therefore the vast magnitude sometimes becomes unbearable in someone life .
Even suffering around us too jolts and conscious fails to restore peace. Then to respite the self the words act as savior.

Often I wonder why does even the vast universe with its unlimited potential to support life fail to cease the grief? Why don’t we make a habit to create peace in ourselves and around us to make the world a little better?

After all in twenty four hours how much we eat, how many clothes we wear at a time- why then the meager needs of survival of individuals create misery and sufferings in the life of others.

Golu was lying on the ground beneath the huge Peepal tree. He was gazing the fluttering leaves up above in the air.

Through the foliages the streaks of sunrays were filtering brightly, to avoid them he slid his head to other side.

His heart was pulsating – the breath was flowing – the mind still conscious – it was thinking. He was thinking about the food- the best and the sumptuous one – the food cooked by the loving hands of granny- feeding the four year old Golu.

She would beckon Golu with food bowls in hand. While feeding him the adoring smile would play on her face. Her silver locks of soft wrinkled face were the tenderest feel of his heart.Sitting in the gentle aura of granny the morsel would taste best to him.

The meal time story used to go on- of king, queen and small princes-“ the princess, whom he will bring as his bride when he will grow up.”

Golu eyes would sparkle with flow of story, not for princes as his bride, but floating in the pleasure of granny’s smile. He would chuckle in his delight not for princes but for granny's presence.

Golu didn’t chortle at the arrival of king and queen chariot because they were full of riches. His eyes had never witnessed the support of grand rich father and mother as he was only accustomed of granny’s lap. Even in his dream he hadn’t seen any motherly and fatherly king and queen.

He had opened eyes in the loving presence of granny. Her touch, her feel and her nearness were his world. The vast world beyond her was unknown and harsh to him.

That day was the tenth day since he had not taken any food. Now the cramping in belly too had subsided or perhaps he was unable to feel it.

There was a giddiness in the head with feeble pain. Day before today he had entered in the park and safely chosen that isolated place at the far corner of uneven earth. The mother earth had given her the comforting lap.

He had never seen his mother and the father never bothered to look after him. Dumping him in frail old granny’s arm was his biggest relief.

Four years back he lost her too. Granny’s death gave him a new name - a burden- a good for nothing fellow -an empty stomach with unfailing hunger.

Subsequently the smirk became unavoidable addition of his food and grief inducing contempt a ritual affair of his meal time. He would get a lump in throat while swallowing the morsel.

His sliding rank in the studies tagged him - a useless fellow in all respect. At sixteen he was not earning. How he supposed to do so?,but he had been eating and was spending on school fee, clothes and food.

He started to detest the food as the contempt would haunt him perennially. He did not know how to deal with hunger? He could stay in old clothes, without school but how to stay without the food? He desperately wanted to expertise the way to beat the hunger.

The smirk on the face and haunting sharp tone during the meal time would numb his brain.

Like Buddha he too wanted to learn the way to mitigate the suffering - how to stay without food became his biggest concern.
Again and again the sneer on the face while receiving the meal had been turned unbearable to him.

Listening everything calmly that day he stared at her blankly . He had sat there quietly for long holding the plate. He was listening the growling around and after a point the added snarls were not making any difference to him.

As he was ready to start his journey he had made up his mind.

He put the plate down – cleaned the dishes, made the beds in different rooms and went to his own at last.

Next day he did all the chores without any food- the dizziness accompanied him at a time then next after that it followed him with intermittent frequencies--.

The howling around him rose the clanking of plates he heard near him several times. But he was peaceful he had now enlightened not to have it any more – the root cause of his misery.

Exhausted till then the eyes were unable to see with clarity but brain grasp the meaning. Now there was no place for him in the house. At last he felt the grip on his wrist someone pushed him outside the door.

To regain clarity of the signal standing at the door for the while he stopped to gasp.

It was fine to get the lap of mother earth under the sky as she never refused any one. Through the foliages in his dimming vision he glanced the soft crinkled face of granny .

His eyes embraced the gaze. She smiled again – behind her there was another face- the beautiful queen of the story. He had seen her in framed photograph at granny’s room-the beautiful mom.

Then she came forth and smiled on him. He was staring at her and after a while he was only staring everything else had stopped.
Posted by Arpana at 7:04 PM