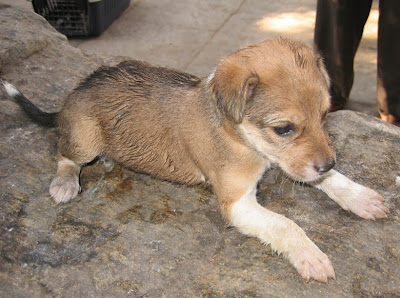 My first trysts with those wobbly legged creatures were rather apprehensive. I would reciprocate the friendly holler of canine with retreating self or by vanishing from the place. The city dwell upbringing of mine had nurtured an aloofness in me to natural world and that was enough to restrict my carefree mingling with man’s best friend.

I had just returned from my native place after a vacation and I was paying my news paper vendor at the exit then I first met them. Sniffing my presence outside at the dusk their mother mistakenly took it as a call for food disposable time. She hurried from backyard, and four wobbly legged tiny ones were following her. She stood beside me wagging her tail in friendly way as if she was trying to revive my promise of food which I had kept throughout her gestation period.

Halting the conversation mid way I stepped further to have a closer look to those white patched and ginger hued ones. They seemed a bundle of joy in their puffy body with soft fur. Perhaps the alien proximity of mine scared them to the core, fearing for their lives they ran hither and dither as if sighted a blood sucking vampire.

In following few days the pups were reasonably closer to my family members especially to my daughter, a great canine admirer and animal activist of her own sort. Till then I was the only object in their sphere of life to be frightened. My friendship with them got further hiccupped during morning hours when I would open the garage to take out my vehicle. Then there they filled with last night showered emotions of mine would start their reciprocation in front of the wheels. Risking the already shaken friendship of ours I would haul them in backyards.

In the evening at my return to show their displeasure and humiliation of morning hours' they would scurry to backyards with their backs on me.
That year the winter had been proving harsh to those furry bundles, then one night her mother and siblings had paid to their lives to a wild brawl among strays. The sudden departure of their siblings and the mishap involved in their sudden disappearance brought some obvious changes in the demeanor of lone survivor. Even the nearness of human and animals were enough to alert her and she would maintain a safe distance from them.

Her aloofness to human started costing her health as she was turning into ribbed cased cage with pickled sort of four reedy arms.

She was always a frightening self. She was only one in the herds of strays of our colony who would contently move behind after having a small portion of food. We never witnessed any doggy and witchy sort of things in her way.

With time she struck the right note with all of us and our nearness relaxed her further.Now she would reciprocate lovingly however she was still ribbed and leaned.There was an unusual compassion on her face. She had beautiful long eyes filled with serenity.

Next winter she gave birth to four puppies, and the sight was all soothing with her naughty ones sleepy over and tumbling down on sleepy mother. The softness and humbleness was innate to her, but the most startling sight of hers at our place became when an orphaned kitten joined her puppies’ clan to suckle her. And ungrudgingly against the nature she had been suckling her too along with her puppies.

Then nature stuck her again and like her troubled past she lost her pups one by one.
We were thinking how she would cope with her lose. But she was more enlightened on that aspect than us, as we human tend to stick to bad incidents. But she had the strength to change the way of life with her thin long bony frame. So what if it was against the nature’s way. Now the kitten all grown on her feed became permanent companion following her everywhere.

Till then, she became loving companions of ours; she was with us during our evening walks. With seasons she became accustomed to our respective vehicles at retreating hours. At the start of the engine she would run to us keeping her at safe distance greeting us. My daughter,s arrival from her hostel would seem to her perfect time to rejoice. She would show her happiness jumping around her and bellowing something undecipherable putting her forearms at her front. That open display of love would last for long and then contently she would retire to any space on the verandah.

After our return from our annual vacation that year we found that winter was unusually cold at our place. To our dismay the harshness of winter got visible to us in her slow and jerky limps during the walk.

After that most of the time we would find her lazing around on the grass bathing the sun rays. One day my husband remarked might be she wouldn’t survive the winter. I shrugged the unpleasantness- “no she is not feeling well, that is why, in few days when the chill will retreat she would regain her agility.” but I had also witnessed that her agility had been yielding to chronic lethargy.

Then that day when after the walk of ten minutes we didn’t sight her, I felt a creeping void; I looked around why she didn’t come. Although we were quiet but we had been feeling her vicinity. “You know she is somewhere in the vicinity, perhaps now she is unable to move.” my husband remarked.

And then we spotted her at the distance amidst the bushes at one corner of the grass. That evening in her ailment somehow she managed to stand at her place and wagged her tail. She flagged us –“I am here.” She stood there for sometime then she sat at the same place that was her last expression of love to us. Even during her last moments she chose a quiet distant place not to create any inconvenience to others.

The place still exists in our yard more importantly in our hearts as a mark of love. Like an angel of love a gingerly hued had created a place in the heart of withdrawn, apprehensive one - “telling me open up, love is limitless, a perennial flow, embrace it and flow with it. That is only the way to live truly.”
Posted by Arpana at 8:03 PM